The following screen shot shows the MSG Evolution Editor and it’s associated context menu commands. The context menu command called Run TG Grid Preview allows you to preview MSG presets that incorporate temporal generators attached to individual editable parameters. All of the individual small MSG preview cells will self-animate when TG Grid Preview is running. You can use the Evolution Editor like you normally would, clicking on presets you like to evolve mutated variations, perform swap evolution, etc to build new self-animating presets while watching their animation behavior in real time as you perform your directed evolution. 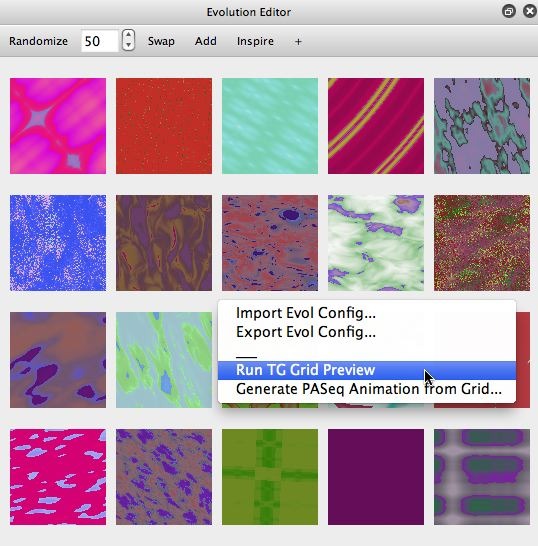 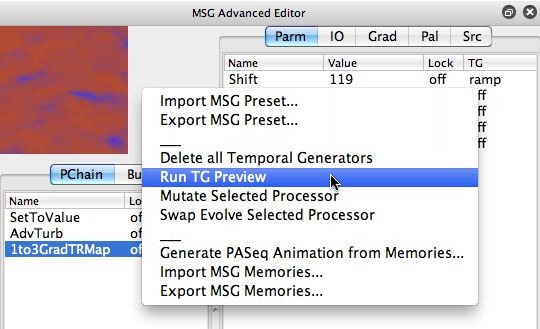 The TG works automatically during the course of an animation continuously adjusting the Shift parameter value from 0 to 255 every 100 frames. The Shift parameter acts like a index offset for the 1 channel black and white image being gradient mapped into a 3 color output image by the 1to3TRMap processor. So this particular self animating MSG effect is like an old school color indexed video processing effect, where the color gradient mapping of the black and white image is continuously cycled every 100 frames in the animation.

Here’s a link to a short animation example of the self-animating MSG preset I evolved in the screen capture video shown above. the animation was generated by opening a movie stream using an enable on op end write flag, and then running the MSG preset with loop action. This write flag will write the canvas image after every MSG effect cycle while loop action is running.

This self animating effect is a simple one, but I hope it gets across how you can use the TG Grid Preview feature to evolve more sophisticated self animating presets while observing their animating behavior in real time in the Evolution Editor.