Using Meta-Edits to Build Complexity into a Simple MSG Effect

Yesterday we showed how to use the 3C Abstract12 CP MSG processor to build pseudo plant-like abstract procedural imagery. Today we will show how to use MSG Meta-Edit help commands and directed evolution to take yesterday’s simple effect and build something more visually complex.

The 1st gallery image below shows the abstract MSG plant-like abstract procedural image effect we ended up created by manual editing in yesterday’s post. You can see the preset we built in the MSG Advanced Editor as well as mutated variants of it in the Evolution Editor. 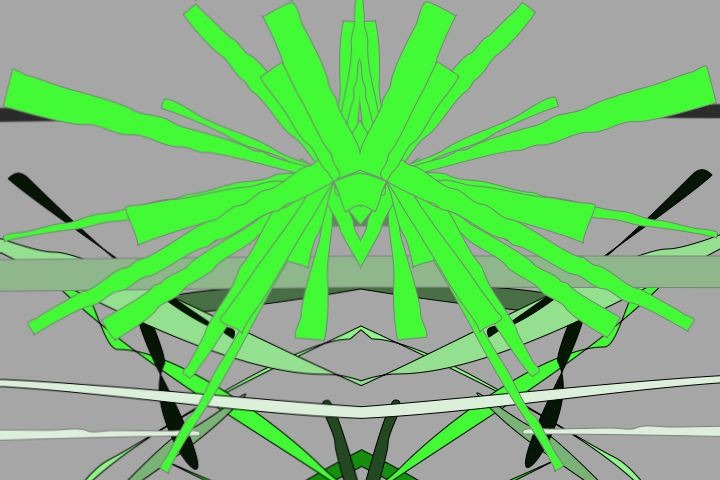 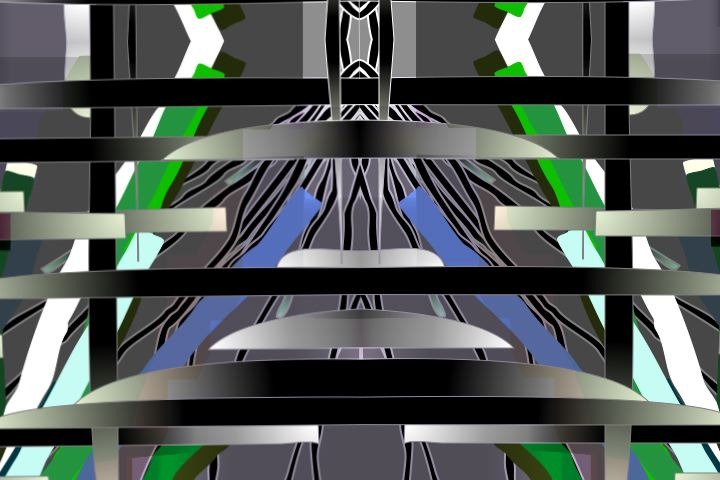 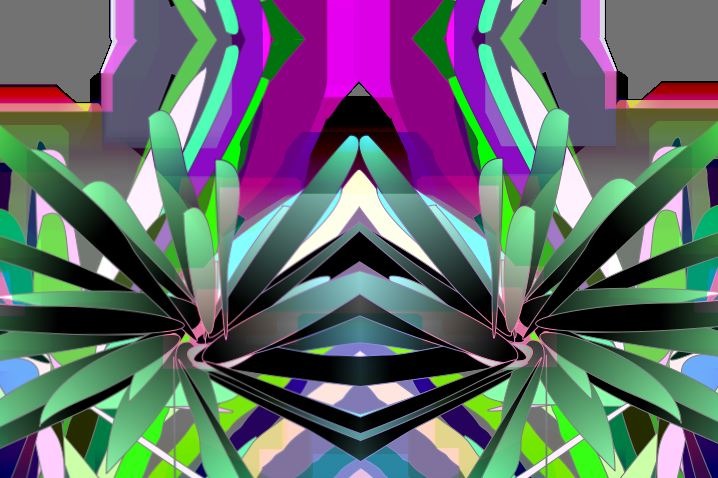 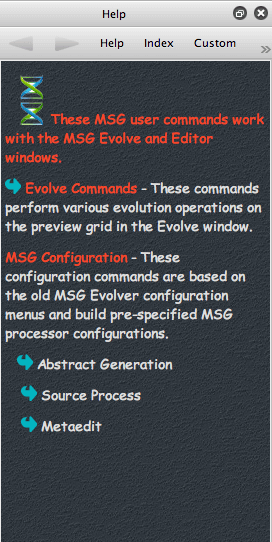 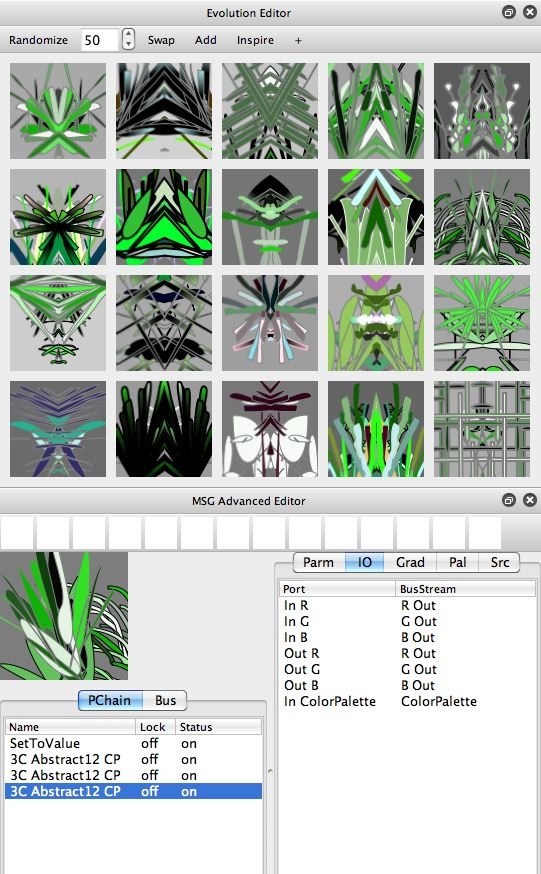 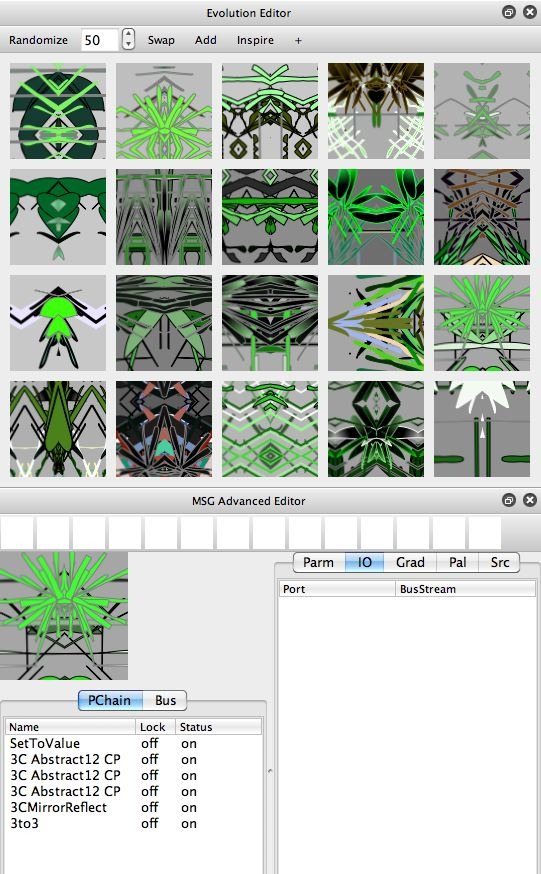 I wanted to extend the visual complexity of the abstract effect we built yesterdays. As we have recently discussed in previous posts, I could use the Swap and Add command buttons at the top of the Evolution Editor to build additional effect complexity via directed evolution. However, another approach is to use MSG Meta-Edit commands.

If you look closely at the 4th gallery image you will see that I scrolled that help page down to the section titled Add MetaEffect at End. The active meta-edit commands in that section allow you to automatically add pre-configured effects onto the end of the current MSG preset’s processor chain.

Some meta edits might only add one processor. Other meta-edit effects might involve adding several different processors that work together to build the selected effect. Some of these meta-edit effects might automatically add additional image streams to the current MSG preset Bus, and then make the appropriate IO (input-output) routing decisions to properly hook up all of the new processors.

Looking at the very bottom of the 4th gallery image (which shows the Add MetaEffect at End section of the long list of different MSG meta-edit commands), you can see that i’m pressing the black arrow button associated with the specific meta-edit labeled Mirror Reflect -indirect. Note that this command is located under the Geometric sub header in the Add MetaEffect at End section. Geometric means that the associated effects in that sub-section add some kind of geometric warp transformation to the current MSG preset.

Again, you could build all of these meta-edit effects manually, but it’s much easier to just click on an active command link to automatically generate the editing steps needed to build the effect into the existing MSG preset.

The 5th gallery image above shows the state of the Evolution Editor and MSG Advanced Editor after I clicked the black button associated with the Mirror Reflect -indirect meta-edit command. Note that all of the Evolution Editor preview cells now have symmetry reflection effects built into them. Also, note that the MSG Advanced Editor and it’s associated current MSG preset has not changed at all. It’s still the original MSG preset we hand built in yesterday’s post.

I clicked on one of the Evolution Editor preview cells I liked the best. the result of this is shown in the 6th gallery image above. Note that the MSG preview I clicked on is now the current MSG preset, and the MSG Advanced Editor has changed accordingly. There are 2 additional MSG processors that were added at the end of the old effect’s processor chain list. Remember, the particular effect category I worked with adds a metaeffect at the end of the processor chain.

Also, note that when I clicked on the Evolution Editor preview cell I liked the best, mutated variants of it were then propagated into the other Evolution Editor preview cells. The end result of my editing at this point is shown at the very top of this post in the first gallery image displayed there. Note that the abstract effect generated by the edited MSG preset is now more visually complex. It has the addition of mirror reflection symmetry, an effect addition I specifically selected from the long list of potential meta-edit effects.

At this point I could continue to work with additional MSG meta-edit effect commands to built additional visual complexity in a controlled way. Or I could start working with Swap and /or Add evolution directly in the Evolution Editor.

I decided I would work with Swap evolution a little. Remember, to generate Swap evolution you press the Swap command button at the top of the Evolution Editor. After doing this, you then click on which ever preview cell you like the best, then continue the cycle. After several cycles of Swap evolution I had the following new MSG effect shown below. 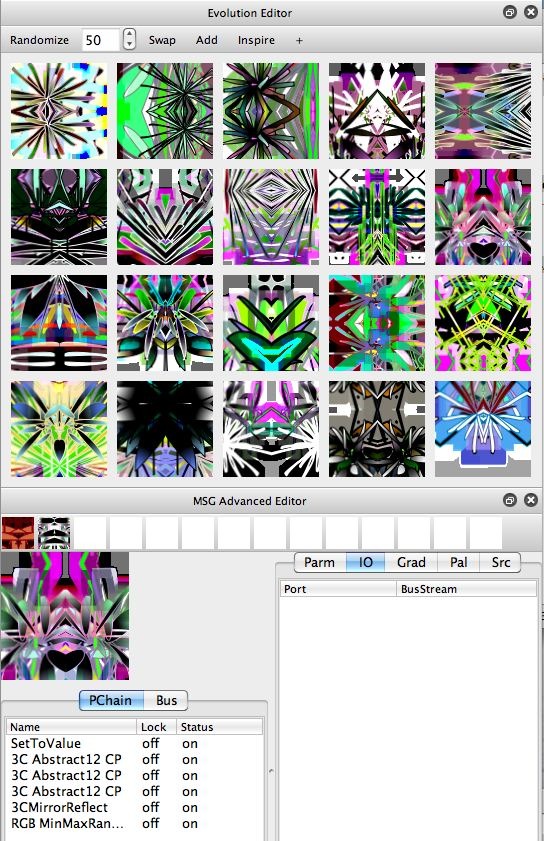 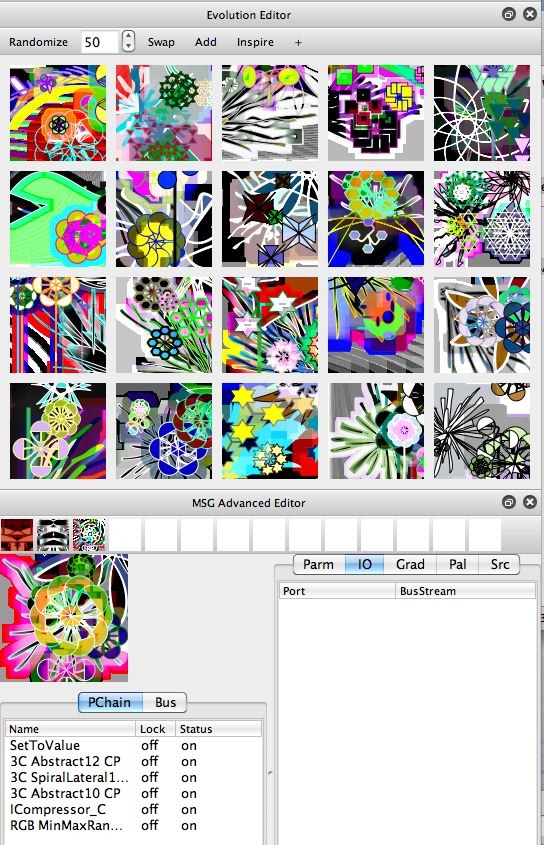 Note that while the number of processors in the processor chain list in the MSG Advanced Editor are the same, some have changed their type because of my directed Swap evolution. A detailed view of the new MSG abstraction effect is shown in the 2nd gallery image at the top of the post.

The 2nd gallery image above shows some more abstract visual effects this particular MSG preset configuration is capable of generating. A detailed view of the new MSG abstraction effect is shown in the 3rd gallery image at the top of the post.

The 3rd gallery image above shows what happens after continuing additional Swap evolution. Note that most of the processors in the processor chain editor have changed at this point in the directed evolution session (although there are still the same number of processors). And note that the visual appearance of the new effects generated by this MSG configuration are now different than the earlier examples shown at the top of the post. You could continue generating new abstract visual effects all day if you wanted to.

A key take home point from today’s post is that I was able to start with a simple MSG preset effect, and then by just pressing buttons and making aesthetic decisions, was able to build a much more visually complex abstract effects. I was able to do this without understanding anything about the technical specifics of hand editing a MSG preset. And I could keep generating an infinite variety of new and different abstract visual effects by continuing with more Swap evolution editing. or by choosing a new MSG meta-edit command.