I was working with a paint action sequence (PASeq) that builds generative paint animation when run over time. I wanted to add a symmetry warp effect to the animation. In doing so I ran into an interesting case where just adding the warp effect to my existing PASeq worked fine for a single frame but did not work as expected when the PASeq was cycled in loop action over time to generate an animation. There is an editing trick you can use to make things work properly, which we will look at in more detail in this post.

The paint animation uses time particles and is based on a PASeq we used in a previous post (the one without the attractor). The first image above shows the correct symmetry effect I was looking for 5 seconds into the animation. The second image in the gallery shows the initial result I got when I naively added the symmetry warp action step to the end of my generative PASeq. You can see the end results look very different. 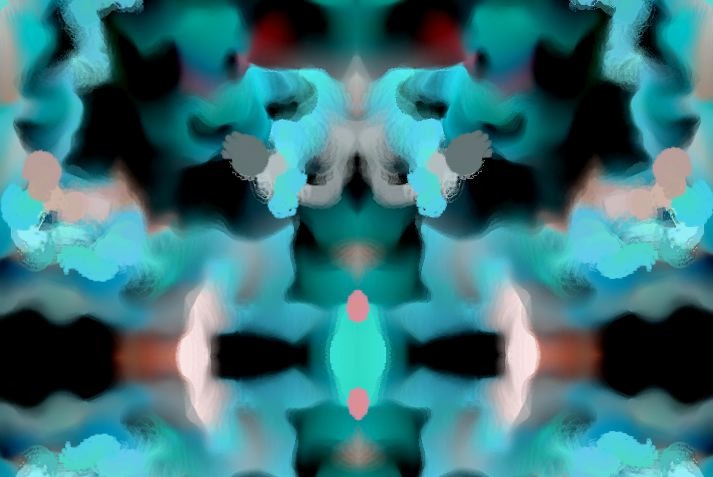 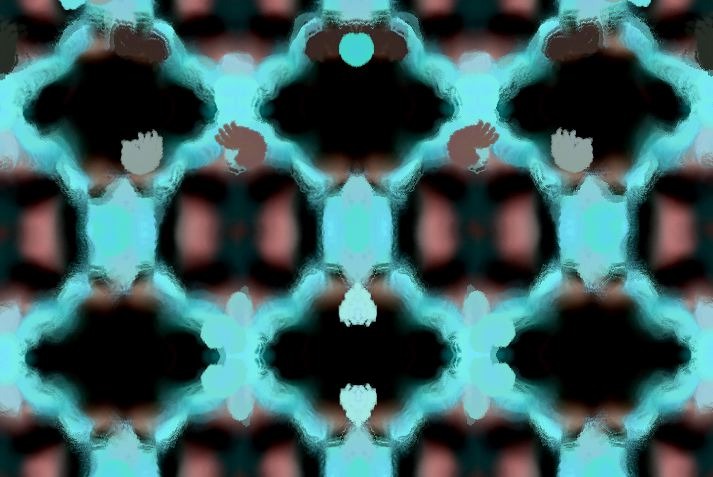 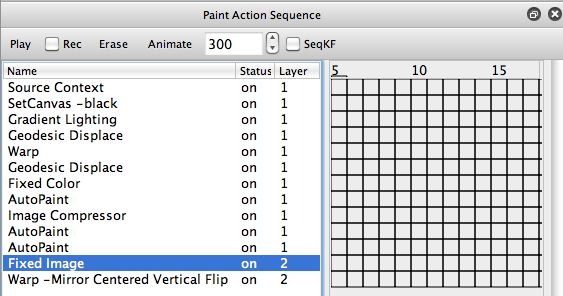 To understand what is going on, you need to think about how the PASeq builds up the animation effect over time. The previous output canvas image is processed in several different ways to distort and fade it, then new time particles are drawn on top of the modified previous output frame. This approach is a kind of recursive processing.

The first image below shows how to configure the Fixed Image ip op to route layer 1 to the current layer (which we want to be layer 2 when we record the action step in the PASeq). Since we’re working with multiple layers, we also want to make sure we have Layer Playback is turned on in the generic Editor for the PASeq preset (shown in the second image below). 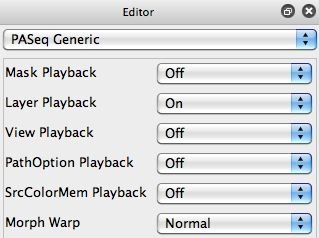 We’re using the View Current Layer canvas view option for this example. This means we only view the current layer in the canvas as opposed to compositing the 2 layers together into a single view. The first layer acts as a buffer to build up our painting and recursive processing of previous paint images. The current recursively processed image in layer 1 is then copied to layer 2, and the symmetry warp only affects layer 2. If we symmetry warped layer 1 then the effect of the symmetry warp would recursively build up over time rather than just be applied to the current output frame.

For example, often times it’s useful to add contrast boosting via the Image Compressor or Edge1 composited Blur ip ops. Both of these ip op actions can boost the output image quality when applied to a single output frame. But if they are used recursively in an animation where their effects build up repeatably over multiple frames they can lead to clipping or blooming. The 2 layer editing strategy allows you to mix recursive and non-recursive processing in a single PASeq.