Today’s post will look at an adjustable parameter available in the paint synthesizer to help fine tune the behavior of a paint preset when you try to resize it. We’ll also talk about some fundamental changes that were made in the Studio Artist 4.03 update with regard to how resizing paint preset resizing works. 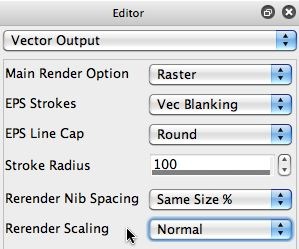 Brush is a term thrown around loosely when discussing paint presets. Typically if someone says they want to resize the brush, they mean they want to resize the drawing behavior of the particular paint tool they are working with, to be larger or smaller. So their use of the term brush really refers to the paint tool’s drawing behavior, as opposed to the paint synthesizer’s Source Brush.

The Brush Source could be a computational brush, which was typically some kind of roundish shape, or could be an image or movie brush. As a paint path was drawn, a series of paint nibs were placed along the path at locations spaced apart based on the settings in the Path Application control panel.

The Brush Modulation control panel provided an additional set of adjustable parameters that could be used to interactively modulate the size and orientation of the current working brush while painting. So again, if you think about the brush as being a roundish shape, then something like pen pressure could be used to modulate the working brush size dynamically as a paint stroke was being drawn. Min and Max settings in the Brush Modulation control panel are specified as a percentage of the size of the Brush Source.

So, with this relatively straightforward rendering model, resizing the brush was as simple as adjusting the Horizontal and Vertical Size controls in the Brush Source control panel. You could either do this manually, or you could hold down the b hotkey and then use the mouse or pen to interactively specify a new brush size directly in the canvas.

One original feature in Studio Artist from the very beginning was the ability to record your manually or automatic painting in a Paint Action Sequence (PASeq) or History Sequence. You could then resize the canvas to a larger size or higher resolution while at the same time re-rendering all of the individual paint action steps recorded in the PASeq or History Sequence. For some paint presets, re-rendering the size of the paint preset is as simple as resizing the Brush Source dimensions so that the size of the brush is proportionally the same relative to the larger higher resolution canvas.

However, Studio Artist makes use of many different internal procedural texture generators. Procedural texture means that the texture field is generated dynamically on the fly in real time while drawing, as opposed to being generated by tiling a small texture image. The human visual system is very sensitive to textures tiled in regular grid patterns, so texture fields or digital paint texturing effects generated from simple image brush textures or tiled texture images have a regular appearance that looks artificial and machine-like to a human viewer.

So this became the initial distinction between ‘re-rendering‘ the brush vs ‘resizing’ the brush. In all versions of Studio Artist prior to the 4.03 update, resizing the brush with the b hotkey just resized the Brush Source dimensions, end of story. Re-rendering the brush (which could be done interactively by holding done the option and the b hotkeys together), also tried to appropriately adjust procedural texture parameters, as well as other things like the maximum path length. Because, the point of re-rendering a PASeq was so that you could play it back into a larger canvas and all of your original painting would take place again with enlarged vector paths and dynamically resized paint. Ending up with a higher resolution painting with more detail in it, bette quality than if you have just used an interpolation algorithm to blow up the original painted canvas.

The old Re-render Canvas dialog in previous versions of Studio Artist included a checkbox to re-render the current paint preset (the Scale Paint Synthesizer Parameters checkbox) as well as the PASeq or History sequence (as shown below). Many users left this checkbox turned on, so when they resized the canvas the current paint preset automatically re-rendered proportional to the new canvas size change. 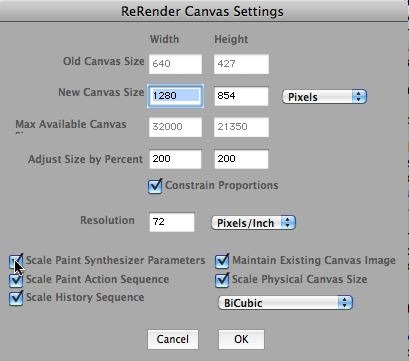 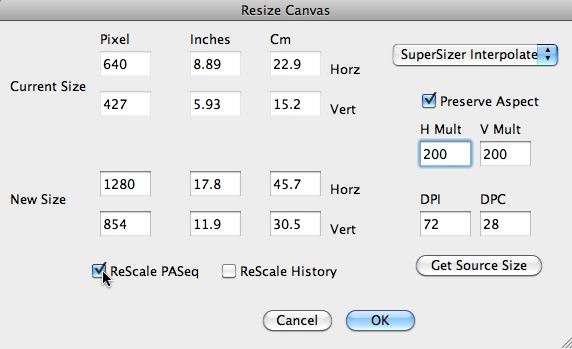 The new Resize Canvas dialog in Studio Artist 4 does not have this old Scale Paint Synthesizer Parameters checkbox in it, just 2 checkboxes to ReScale the PASeq or History Sequence. So this is one thing to be aware of, version 4 will not automatically re-render the current paint synthesizer preset proportionally if you resize the working canvas like it would typically do in previous versions of Studio Artist. You would need to do that paint preset adjustment manually.

In version 4.0 through version 4.02 you would have to use the option b hotkey combination to dynamically re-render the current paint preset. In version 4.03, we actually switched the b and option b hotkey behavior. So in version 4.03 and into the future, using the b hotkey to resize the ‘brush‘ actually runs the re-render code internally. We did this because this is typically what a user expects to have happen when they resize their current paint preset. Again, note that people are often loose with terminology so they use ‘brush’ to refer to the entire paint preset (as opposed to just the Brush Source dimensions, which is just one small aspect of all of the parameters associated with a paint preset).

As Studio Artist has developed over the years, the rendering models available for use in the paint synthesizer have extended beyond the initial simpler Brush Source applies digital paint along a vector path model described above. This has made the notion of what the naive user perceives as the working ‘brush‘ vs how that perceptual ‘brush‘ is actually implemented internal to the paint synthesizer more complex.

One example would be what I refer to as a virtual brush. The user is painting with what appears to be a brush of a certain size. but it might actually be built internally of a large number of smaller Brush Source shapes that work together as a cloud of paint, or multi-nibs of paint, or multi-dynamic paint particles that move and act to the user like a single dynamic large brush, when internally the perceived brush is actually smaller brush particles running around in some kind of dynamic movement algorithm.

For any kind of virtual brush, just changing the size of the Brush Source is not going to be perceived by the user as adjusting what they perceive to be the actual brush size in a reasonable way. Since what they perceive as the ‘brush’ is a dynamic process that moves individual small particles over time to give the appearance of a larger virtual brush. So that entire dynamic process needs to expand the virtual cloud of paint the user perceives as the ‘brush’.

Version 4 also introduced new vector drawing models like the AntiAlias Solid Brush Type, where the Brush Source control panel may not really be doing anything since the paint path is being defined and drawn dynamically as an actual vector shape (as opposed to a series of paint nibs strung along a path one by one).

Or consider the Region Fill as Brush pen modes. The paint path dynamically defines a temporary on-the-fly generated one time region that substitutes for the Brush Source. So for this kind of brush or for some of the vector brush type options, resizing the Brush Source dimensions either has no meaning, or can lead to potentially ridiculous dimensions for the associated Brush Source cache. Brushes like computational brush sources use an internal memory cache to store the various size and orientation variations defined by the Brush Modulation control panel settings.

Geodesic Brush types are also Dynamic brush algorithms where the Brush Source control panel settings have no real meaning as far as their drawing behavior.

Situations like the concept of building a virtual brush, or some of the new features associated with version 4 where the apparent brush size to a user is really only defined by the path length and not any dimension setting in the Brush Source control panel meant that we needed to provide a way for a preset designer to potentially help the paint synthesizer decide what to do when the user just wants to resize what they perceive as the ‘brush‘.

Ideally a user just wants what they see as the working brush to resize appropriately, whether that needs to happen by adjusting the Brush Source dimensions or just the maximum path length, or the dynamic cloud behavior of a collection of paint particles that work together to simulate what the user thinks is a larger virtual brush, or the geodesic brush movement spacing parameters.

The Rerender Nib Spacing and Rerender Scaling parameters in the Vector Output control panel are 2 adjustable controls you can use to force the paint synthesizer to make assumptions about what should or should not be adjusted when the user tries to ‘resize’ the brush (what we used to call re-render the brush).

Normal assumes the original paint nibs placed along a path model, or tries to be smart about certain other pen modes or internal settings (like geodesic brushes), so that’s the default setting. Microstructure assumes that you are working with a virtual brush composed of smaller paint particles that fool the user into thinking they are adjusting a larger brush (when in fact what they perceive of the brush is just the dynamic behavior of particles over time). Path Len Only assumes that only the maximum paht length is defining the perceived brush size, and any other internal parameters are ignored when resizing the current preset.

If You Run Into Problems

We tried to make the brush resizing behavior more consistent and intuitive to users in version 4.03. However, you might still find particular paint presets that you feel do not scale in what seems like an appropriate perceptual manor. If you run into something like this, please email techsupport AT synthetik DOT com and let us know about it, and we’ll see if there are additional special cases we need to build into our brush resizing logic used internally when the paint synthesizer tries to intelligently resize a paint preset.

Also, we should probably add back the old Scale Paint Synthesizer Parameters checkbox in the ReSize Canvas dialog, or provide a resize paint preset dialog under Edit : Paint Synthesizer menus in some future update. Based on some tech support comments from recent new version 4 users, some people are assuming that the old current paint preset automatically resizing when you resize the canvas behavior is still there when it currently isn’t, and then wondering why the paint presets appear to act differently as opposd to how they did in version 3.5.

Here’s a tip that talks about Adjusting the Brush Size. It shows some examples of interactively adjusting the brush size as well as an example of one type of virtual brush.