This post will discuss a simple approach you can take to help you get a better feel for visualizing how different temporal generators work.

The question was actually posted in a discussion about temporal image processing effects, so let’s start by making the distinction between the 2 clear. Temporal image processing effects are time based effects that process multiple movie frames. Temporal Generators are procedural modulators you can attach to editable parameters associated with processors in MSG preset.

The whole point of a temporal generator is to modulate an individual editable parameter over time. Doing so can create automatic procedural animation when running the MSG preset in loop action, or when using it to process a movie, or when using it embedded in a paint synthesizer preset, where time could again be frames in a movie or positioning along a paint path.

The particular factory preset we will use for this example is the a Simple Texture preset in the Default : General category. 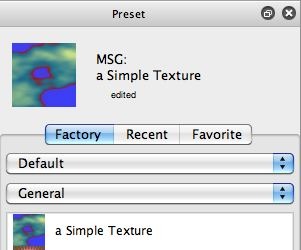 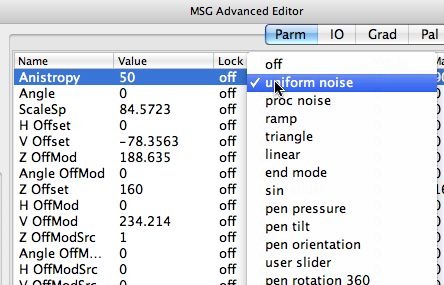 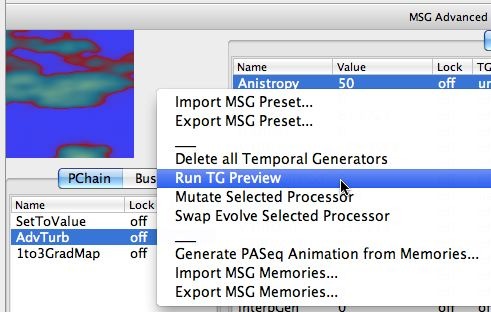 It’s based on 3 processors that first set an image stream to a flat gray value, then use an AdvTurb processor to generate a turbulence noise field, then color map the noise field image stream with a color gradient to generate full color output. To help visualize the effect of different temporal generator options, we first clicked on the TG field for the Anistropy (short for Anisotropy or directionality) parameter to bring up a temporal generator (uniform noise to start).

This could potentially be a little confusing, because a temporal generator can be used to specify a self oscillating modulator or an interactive modulator.

The temporal generators that are time based free-running oscillators include the Uniform Noise, Proc Noise, Ramp, Triangle, Linear, End Mode, Sin, Square, Gaussian Noise, Chaotic Noise, Rossler Noise, Pulse, Cos, Lorenze84 Chaos, Uniform Random Walk, and Gaussian Random Walk options. The Uniform and Gaussian Noise options don’t pay attention to the TG_Inc setting, since they aren’t time based oscillators that cycle. The other time based oscillator options do pay attention to the TG_Inc setting. Increasing it will slow down the effect of the modulation, since the cycle of the free running oscillator will take longer to complete.

The interactive modulators based on having a Wacom pen and Tablet include the pen pressure, pen tilt, pen orientation, pen rotation, pen position, and pen proximity options. The pen rotation 360 and 180 options require a Wacom Intuos art pen to work, since they are based on pen barrel rotation. Pen pressure is available with all Wacom tablets. Pen tilt and tilt orientation require an Intuos tablet.

Pen proximity means that the pen is hovering close above the tablet (or touching it). Pen proximity is useful, because you can use it to modulate a MSG effect that might be embedded in an auto-painting pain synthesizer preset without stopping it, which touching the pen to the canvas would do (since it switches to manual drawing). You can use pen tilt and tilt orientation to modulate a MSG effect while the pen is hovering over the tablet surface without actually touching it, so you can interactively modulate a free running MSG effect in real time with those modulators as well as the pen position modulators.

The third gallery image above shows the Run TG Preview context menu option available for the MSG Advanced Editor To access context menus, you control click on the interface area if on the mac, or right click the interface area if on windows. After you run the Run TG Preview context menu command, the MSG preset will run in loop action mode in the preview cell located in the top left corner of the MSG Advanced Editor. Since the preview usually is generate very quickly,this provides a way to run the MSG preset in loop mode quickly and see the effect of any temporal generators by watching the preview of he effect change in real time.

To stop the TG Preview, press the spacebar key.

You could of course just run a MSG preset in loop action mode and watch the temporal generator procedural animation or pen and tablet based interactive modulation take place there. Run TG Preview is useful since the time to process an individual cycle of the effect usually runs much faster when working at the Preview cell size as opposed to processing the entire canvas. But if you are using temporal generators for live visual performance, then of course you will ultimately be working with them while running a MSG effect in loop action mode drawing into the main Studio Artist canvas.