Outputting Vector Painting from the Paint Synthesizer as a Vector File

Today’s post continues our series devoted to examining how to use Studio Artist to output resolution-independent vector effects as EPS or SVG vector files. Yesterday we discussed how to work with the vectorizer to output vector files. Today we’ll take a look at how to record vector paint presets in a paint action sequence (PASeq) and then use the PASeq playback to stream vector painting directly from the paint synthesizer to a vector file. 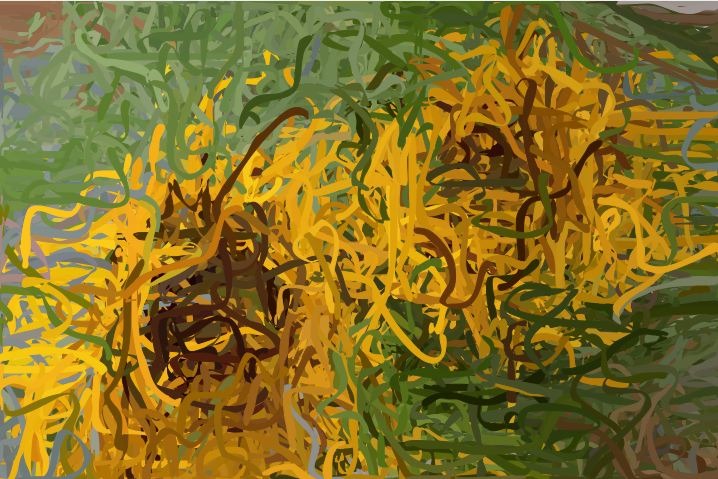 Vectorizer effects can either be output directly as vector files (like we did yesterday), or can be recorded in a PASeq that can then be used to later output a vector file. The paint synthesizer can also generate vector output, assuming you have configured it for one of several possible approaches to vector drawing. By working with a PASeq you can combine different action steps that generate vector output together to build more elaborate vector output effects.

There are 2 main approaches you can use to generate vector painting in the paint synthesizer. Today we’ll be looking at the original vector drawing option added to the paint synthesizer (via the Main Render Option parameter in the Vector Output control panel). Tomorrow we’ll look at some additional approaches to building paint presets with direct vector drawing and vector file output capabilities.

Historically EPS vector output was added to the paint synthesizer when the Vectorizer was originally first added to the program. The adjustable parameters in the Vector Output control panel determined what the paint synthesizer would do if outputting eps file output, but what you saw draw on the screen was still the original raster based paint model associated with the original paint synthesizer design. You had the option of configuring your raster paint to emulate the flat color look of the vector paint output, or you could actually vectorize individual raster paint strokes one by one as they were painted to generate vector file output.

Later, we added the Main Render Option parameter as a new feature to the Vector Output control panel. The Main Render Option lets you choose between the Raster option (the original paint synthesizer drawing mode), the Vector (solid color) option (true vector drawing that overrides much of the original paint synthesizer drawing engine), and the Vector-raster Repeat option that lets you build hybrid vector-raster paint styles (combining initial vector painting with a secondary raster paint overlay, which allows you do add things like wet paint effects to vector painting).

The first gallery image below shows the normal Raster setting for the Main Render Option. Painting occurs using the normal paint synthesizer raster paint engine. But if you are outputting a vector file then the EPS Strokes paramter determines how vector paint strokes are derived from the raster paint strokes being drawn into the canvas.

The 2nd gallery image below shows off the different EPS Strokes options available. The Vec Blanking one active actually uses the vectorizer to vectorize each individual paint path when it is drawn as a vector region and then output the color filled vector paint stroke region out to a vector file. Other settings assume the paint path is rendered with vector spheres, or as a bezier path or bezier region, etc. Again, none of the EPS Strokes options determines what you see drawn on the screen, just what gets drawn into a vector file if you are using the paint preset recorded in a PASeq to output to a vector file using one of the vector output Action menu commands. 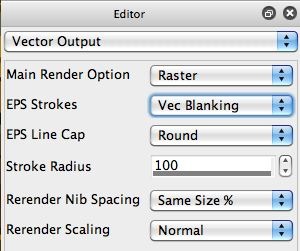 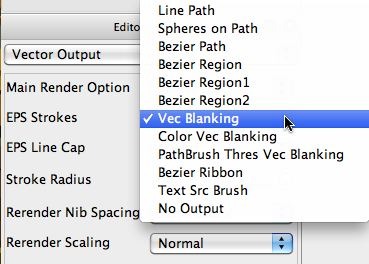 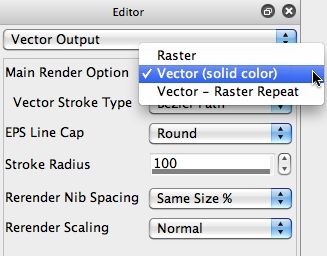 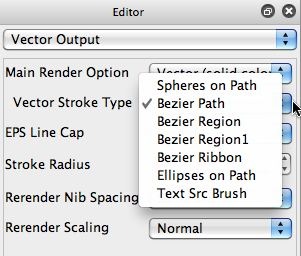 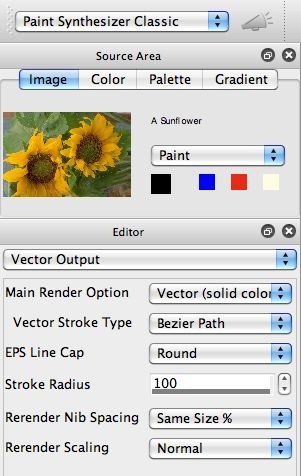 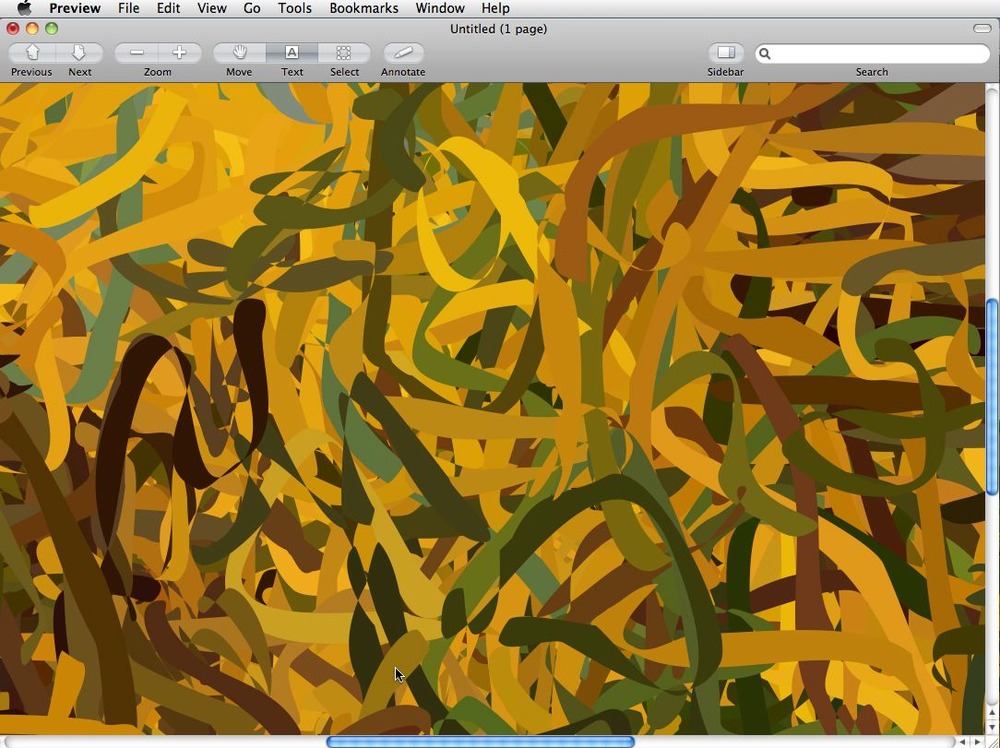 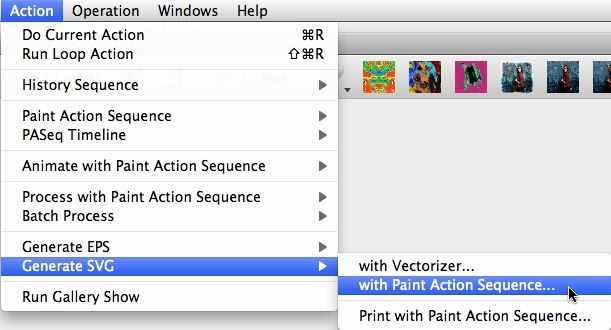 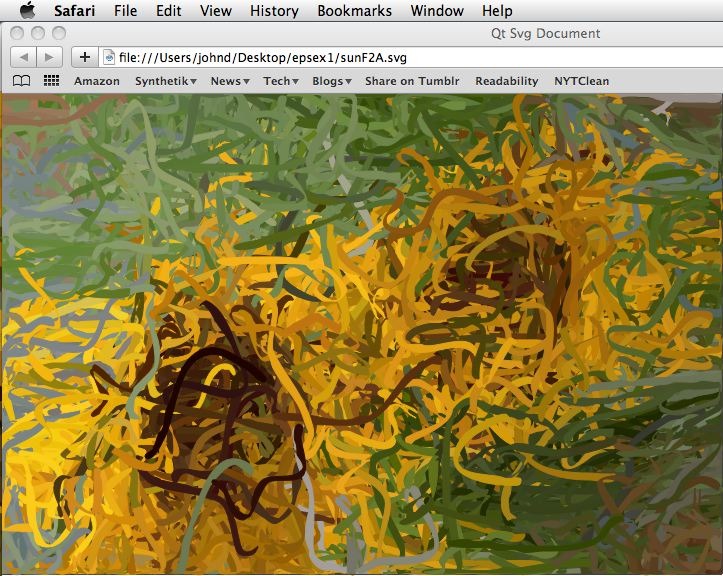 The 3rd gallery image above shows off the Vector (solid color) setting for the Main Render Option we will be using for today’s example shown at the top of this post. The rough paint style is drawn with true vector painting into the canvas, so what you see drawn in the canvas is also what you directly see output into a vector file.

The 4th gallery image shows off the different Vector Stroke Type options. Note that the EPS Strokes parameter vanishes if we are using the Vector (solid color) setting for the Main Render Option. This is because there is no need to artificially convert a normal raster paint stroke into some form of vector output, since we are directly painting with a vector drawing technique into the raster canvas. Instead, we get the Vector Stroke Type parameter that directly determines the kind of vector drawing that will take place (both in the canvas and in the vector file output).

The 5th gallery image above shows the paint action sequence (PASeq) we used to build the simple demonstration vector file output shown at the top of this post. The effect is a rough fairly simple vector paint style. Note that I actually combined the vectorizer along with a vector auto-paint action step to build the complete paint effect. I used the first vectorizer action step as a way to rough fill in the entire canvas with simple flat color vector regions (as opposed to filling the canvas with a solid color and then overpainting on top of the solid color).

The 6th gallery image shows the specific Vector Output control panel settings I used for my simple flat color vector paint style. I’m using the very simple Bezier Path option for the Vector Stroke Type parameter. I could have worked with Path End control panel settings to make the paint source representation tighter if I wished to, but I kept it loose and rough for this simple example.

There are additional approaches to configuring the paint synthesizer for vector painting and associated vector file output. We’ll take a look at a different approach in tomorrow’s post.