The post called Simulating Video Feedback described how to build a simple paint action sequence that incorporated an Image Compressor ip op effect and a MSG rotation and scaling effect to simulate analog video feedback. This post take a second look at that post, and shows how to build this style of effect as a single MSG preset.

Some questions were asked on the Studio Artist User Forum the Simulating Video Feedback post. So I thought we’d take a second look at what is going on in the video feedback effect.

Part of the user forum discussion focused on how to replicate the different Bus Streams used to build the MSG preset used within the PASeq preset that generates the video feedback simulation. Different MSG preset contain varying image streams in their internal Bus list. The Bus list is a list of the various streams that are available for use in a MSG effect. Streams take up memory, so you only want to have streams available on the Bus that are actually used in the effect. Some MSG preset are totally generative in nature, so they don’t process a source image. Because of that the R Src, G Src, and B Src input image streams are not necessary to run that kind of MSG preset, so they typically are not included on that MSG preset’s Bus.

Part of the confusion associated with the forum discussion on the Nov 8th post centered on users not understanding about how to replicate the Bus streams used in the Nov 8th post. The Bus list associated with any MSG preset is completely editable by a user in the MSG Advance dEditor, so if the R Src, G Src, and B Src input image streams are not available you can easily drag and drop them from the Stream Source LIbrary tab over to the Bus list.

It turns out this particular effect is very sensitive to the parameters associated with the Image Compressor action step as well as the MSG rotation and scaling warp. The original post was also a little confusing because it shows 2 MSG action steps in the PASeq for the effect, but one of them was actually turned off when the video animation was generated. I did this at the time the first post was put together because I liked the nature of the video feedback simulation more without the second MSG action step after rendering out both options as animations.

You can build a single MSG preset that tries to emulate what is going on in the Nov 8th PASeq preset. It turns out that the Image Compressor action step used in that PASeq is actually very import to help generate the particular feedback textural patterning seen in the Nov 8th animation. 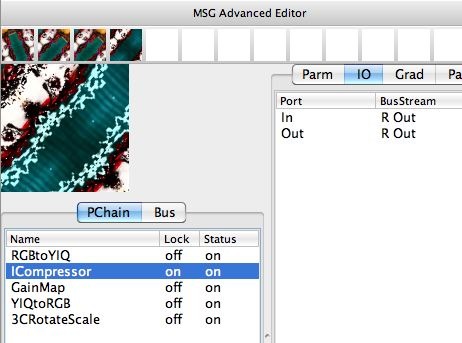 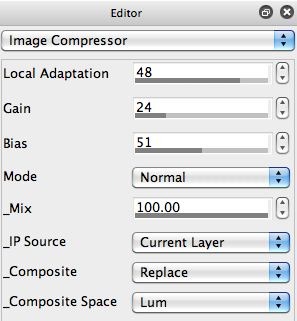 The Image Compressor action step is actually a little more tricky to replicate. The original Image Compressor control panel settings for the Nov 8th PASeq preset are shown in the 2nd gallery image above. Note that the Composite parameter is set to Lum, so only the luminance channel of the effect output is composted with the luminance channel of the current layer. Note that the Gain control is also cut down to 24 %.

The first 4 processors in today’s MSG preset try to duplicate the Image Compressor settings used in the Nov 8th PASeq preset. They try and duplicate the luminance compositing as well as the nonlinear Gain tone mapping going on in the original Image Compressor ip op action step. This should give you a feel for the power inherent in Studio Artist’s image operation effects. The build in compositing options allow the nature of a particular ip op effect to dramatically change.

The Image Compressor ip op incorporate the nonlinear Gain mapping into the adaptive effect it generates, so simulating how it works by adding a single GainMap processor in today’s MSG preset is not going to duplicate the exact effect the original processing generates.

We can add something similar to today’s all in one MSG preset (as shown in the 2nd gallery image above). Note that the individual parameter settings for today’s effect are somewhat different as opposed to the original Nov 8th settings. This is why the textural patterning seen to evolve over time when today’s MSG preset is run in loop aciotn is somewhat different when compared to the original Nov 8th animation.

The textural patterning that will be generated by this MSG preset and associated underlying recursive processing is very dependent on the particular paramter values you specify. By playing around with different parameter values and temporal generator settings you can dramatically change the behavior of the preset when it is run in loop action mode.

I hope today’s discussion helps to fill in some blanks for what is going on under the hood of the original Nov 8th video feedback simulation example.