The screen shot above shows an example of 3 different instances of a movie brush playing back in real time in the Studio Artist canvas. I’m using the movie brush paint preset we built yesterday, with one slight editing modification that will be described below. The edit allows me to interactively define and move around multiple live drawing pen tracking positions in realtime, in this example allowing for 3 different live movie brushes to be playing simultaneously in the canvas. 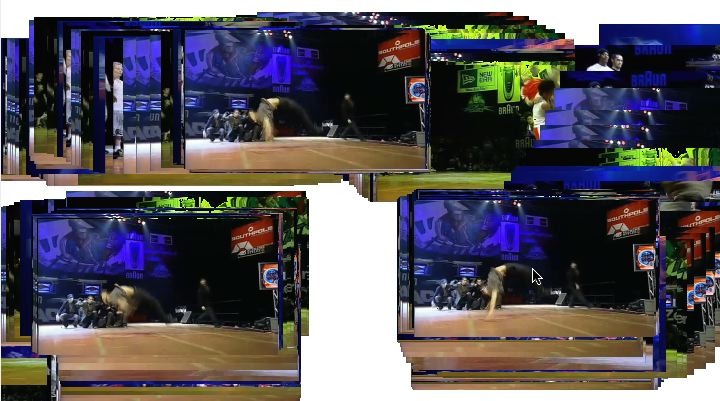 The paint synthesizer preset used in today’s post is identical to the one we explained how to build yesterday, with one exception. I switched the Path Start control panel Generator parameter setting from Pen Position Live Track to Pen Postion Live Track MP. The MP stands for Multi Position. The Pen Postion Live Track MP path start Generator was added at the specific request of some Studio Artist users who are pioneering the use of the paint synthesizer for live performance. What they wanted was the ability to interactively specify one or more live paint positions, where in their words ‘paint would continuously spew out from the multiple positions until they were manually adjusted or repositioned at some later time’.

But the normal way the paint synthesizer works is that a mouse click or pen press on the tablet stops any automatic Action drawing, and switches immediately into a manually drawn paint stroke. This make sense, because it’s the kind of behavior you would expect from a conventional digital paint program. But pen proximity is very powerful, because you can specify and adjust a position on the canvas by hovering the pen without instigating a mouse click or pen press event.

And by lifting the pen out of proximity and then back into proximity again, you can define the positioning of multiple pen tracking points. Working with a combination of key presses in conjunction with moving the pen in and out of proximity allows for interactively adding multiple live pen tracking positions, or moving existing ones in real time, while Auto-painting instigated by the Action button is taking place. Using the Pen Postion Live Track MP path start Generator is the key to working with this live performance feature for specifying and then moving around multiple paint ‘spew’ points in real time as the paint synthesizer auto-draws.

This link to a canvas screen shot movie shows how I worked with the Pen Postion Live Track MP path start Generator in real time to build up 3 different moveable paint ‘spew’ points, each playing a live movie in their moveable paint nib position. Because i’m using 1D frame indexing for my movie source brush, each paint nib is playing back the same movie loop. But I could embed several movie loops of the same size into a different movie brush, and then use 2D frame indexing to have multiple live movies playing simultaneously at my different live pen track positions.

I can also use the concept of working with multiple interactively adjustable live pen tracking positions in conjunction with DualMode Paint operation mode or by using additional paint synthesizer features like Image Processing Paint Brush Load or Auto-Region as Brush to create more sophisticated effects than the simple play a movie brush back live in the paint nib examples we’ve been workign with here.