The image below shows off the behavior of a tilt-sensitive paint preset. I used a Wacom tablet and pen to paint a few air brush paint strokes. Note that depending on how I hold the pen in relation to the tablet surface, I can generate a circular air brush spray pattern, or use pen tilt and tilt orientation to direct the orientation and edge density of the directional air brush paint spray.

The particular factory paint preset i’m using in the above drawing example is called Particle Spray1, and is part of the oldWorkFavorites preset favorites category. There are also similar tilt direction spray paint effects available in the Wacom factory paint preset Collection.

I thought it was worth taking a look under the hood of this paint preset to get a feel for how you can use interactive modulation to create extremely expressive paint effects based on Wacom pen modulation. I’m using a Wacom Intuos tablet, because it offers pen tilt and tilt-orientaiton modulation in addition to pen pressure modulation. We are using all 3 different kinds of modulation simultaneously in this paint preset. 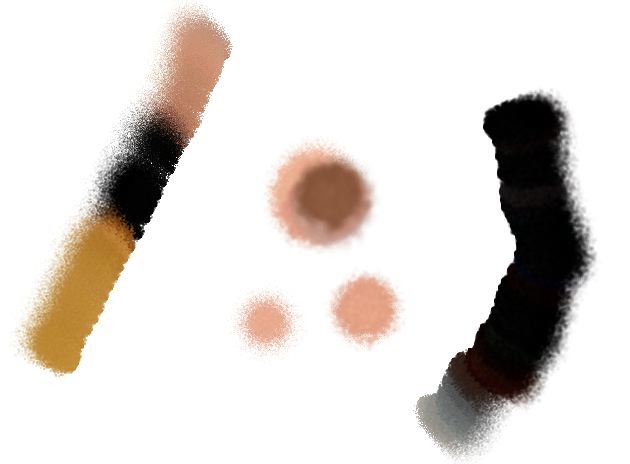 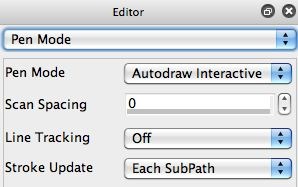 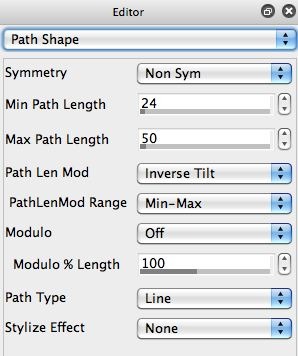 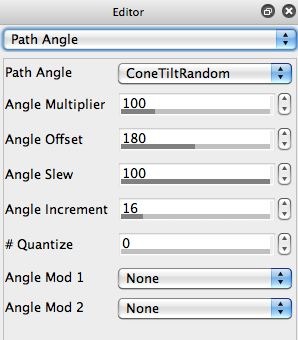 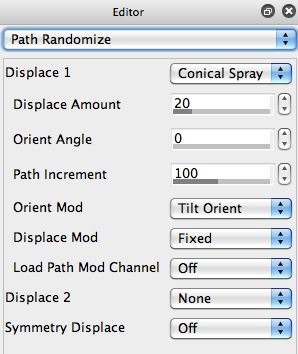 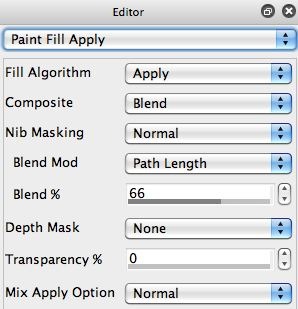 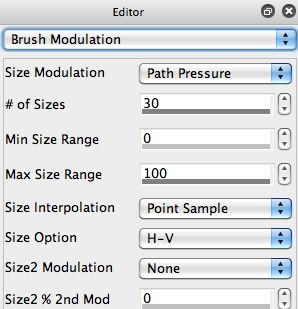 The spray comes from the series of automatically generated paint paths that are generated by the Autodraw Interactive pen mode. Autodraw Interactive pen mode is a kind of intelligent-assisted painting tool. The paint tool automatically paints a series of paint paths as you move the pen. In this particular example, the automatic path generation and path painting is designed to simulate the effect of an air brush spraying out tiny globules of paint.

If the pen is purely perpendicular to the surface of the tablet, then that’s a tilt of 90 degrees, which would be the maximum tilt you could generate. So the pen tilt refers to the angle of the pen axis in relationship to the tablet surface. As you tilt the pen down to become more parallel to the tablet surface, the tilt modulator decreases until it would be 0 if the pen was laying flat on the tablet.

Since we are using an Inverse Tilt modulator to modulate the path length, the path length increases as the pen tilts down to be more parallel to the tablet surface.

Note that the Path Type is just a Line. Also note that the Symmetry is set to Non Sym (for non symmetrical). Note this is interesting, because when you hold the pen vertically above the surface of the tablet for maximum tilt, we get a symmetrical spherical spray of paint. How is this possible when using a non-symmetrical path symmetry?

The answer can be found in the 3rd gallery image above, which shows the Path Angle control panel settings. note that the Path Angle parameter is set to the ConeTiltRandom setting. This is a special path angle modulator that is based on Wacom pen tilt and tilt orientation. It’s specifically designed to build autodraw interactive pen mode paint effects that are symmetrical when the pen is vertical, and direction when the pen is tilted down.

If you draw with a mouse as opposed to a Wacom tilt sensitive pen this path angle setting will assume the tilt is maximum and generate a circular effect.

The 4th gallery image above shows the Path Randomize control panel. Note that the Displace 1 parameter is set to a special Conical Spray setting. Again, this specific setting is designed to generate conical spray effect. Note that a spraying air brush tool has a tight stream of particles close to the spray ejector of the tool, and then as the paint particles fly away from the ejector nozzle they will fly further apart.

To ge a better sense of how this particular kind of paint tool works, try going back to the Pen Mode control panel and set the Scan Spacing control from 0 to 1. Now, rather than being a free running active paint spray tool, you will need to move the pen to eject single paint paths from the pen tip (where the pen tip is simulating the nozzle tip of a real air brush tool). This parameter change will enable you to see single automatic paint paths drawn one at a time, as you change the pen tilt and tilt orientation. This will give you a better feel for how the interactive tilt modulation going on simultaneously in the Path Shape, Path Angle, and Path Randomization control panels are working together to create the conical paint spray effect.

But wait, there’s still more interactive modulation going on in this paint preset. The 5th gallery imagr above shows the Paint Fill Apply control panel. Note that the Blend Mod parameter is set to modulate the blend based on the Path Length.

So, we’ve covered a lot of paint synthesizer ground in this post. I hope you have gotten a feel for how you can create conical spray effect that are extremely sensitive to how you hold and maneuver a tilt and pressure sensitive pen (like the Wacom Intuos pen and tablet). This particular air brush effect has been around since the dawn of Studio Artist time (when G4 chips roamed the earth). But I hope the discussion of how this particular paint preset works gets across several things.

First, that Studio Artist provides an extremely large number of different ways to modulate internal paint synthesizer parameter settings based on interactive modulation signals from a pen and tablet. From version 1 continuing to today’s version 4, Studio Artist is by far the most sophisticated digital paint tool available on the planet when it comes to taking full advantage of all of the interactive features available in Wacom’s pen and tablet line.

Real world art tools have an organic complexity associated with how they work, both in terms of how touching or maneuvering them affects the kinds of drawing they can do, as well as the visual appearance of the media itself. Emulating this kind of organic complexity in a digital paint tool takes a sophisticated, flexible, and nuanced approach, the kind you are enable to achieve with the over 500 interactive adjustable and modulatable parameters available in Studio Artist’s paint synthesizer.