The Process Movie Tutorials are some old Studio Artist tutorials that were originally generated several version releases ago. They discuss some fundamental basics regarding how to go about constructing paint action sequences (PASeq) for movie processing so that the processing scripts incorporate the notion of temporal continuity into the paint animation effects they generate. We’ll be taking a look at these old movie processing tutorials over the next several posts, since the information they contain is timeless, and worth delving into for anyone interested in getting started processing movie files with Studio Artist.

What is Temporal Continuity?

How to go about constructing a PASeq for movie processing that leads to reduced or eliminating visual flicker is a topic of interest for everyone who wants to generate auto-rotoscoped paint animation effects using Studio Artist. The key conceptual component to eliminating flicker is to incorporate the concept of temporal continuity into the successive movie frames of the visual effect you are creating.

Temporal continuity is a fancy way of saying that there needs to be visual similarity between adjacent frames. Perceived flicker in an animation or video processing effects is caused by variations at what is visually presented in localized spatial areas over adjacent frames over time. If the visual information at a particular spatial location in the movie frame is always changing from frame to frame, then you perceive that as flicker.

Obviously video frames contain temporal variations, because the whole point of video is to observe movement and change over time. But imagine an object moving in front of an unchanging background. The object is moving, but probably slowly from adjacent frame to adjacent frame. Otherwise you would just perceive it as a blur rather than something specific moving. And the background of the video is the same, or slowly changing.

Individual paint strokes that blink into and out of existence every new frame seem to be flickery to a viewer. Color variations in time sustaining paint strokes that randomly change from frame to frame will also be seen by a viewer as noisy flicker.

Treating paint strokes as time based objects that sustain themselves over multiple frames would be one approach. And indeed the paint synthesizer provides such a feature, called Time Particles. But in the next few posts, we’re going to ignore that feature and just concentrate on how to introduce temporal continuity into paint animations.

The list of potential ‘modifications‘ goes on and on. The key point is that they work in a way that doesn’t introduce additional flicker. So they tend to be subtle as opposed to radical changes in the appearance of the previous frame content. And temporally smooth.

So adding uniform random noise to each individual frame would be a bad idea for modifying the previous frame unless you wanted to add more flicker. Now if you wanted to make your footage look more grainy or old then adding some form of stylized flicker might be just what you wanted to do. But if your goal was to reduce flicker, then it would be a bad idea, since local spatial areas in the movie frame would radically change from one frame to the next one (the opposite of temporal continuity). 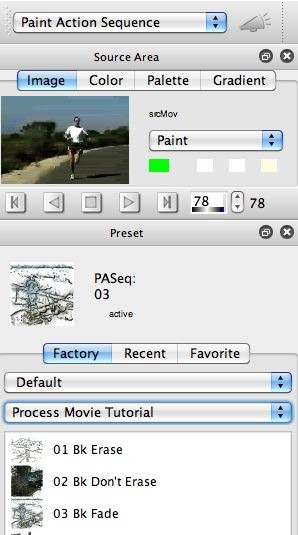 The 2nd, 3rd, and 4th gallery images above show off the first 3 PASeq presets in the Process Movie Tutorial category. They are called 01 Bk Erase, 02 Bk Don’t Erase, and 03 Bk Fade.

They all involve physically identical generated paint strokes. The individual paint strokes are generated using an interesting technique, which involves generating a set of bezier paths from the edge structure of the source movie frame, and then painting those bezier paths with a simple thin colored chalk paint preset.

These 3 action steps are recorded in the PASeq by running 3 different Path menu commands (as shown in the image gallery below).

Building a paint animation by generating bezier paint paths from source movie frame edges can also act as a way to introduce some temporal continuity in an animation, as well as help define the motion of objects accurately in the generated animation. Again, there are lot’s of different approaches to working with automatic Path generation and Painting we will discuss in later posts. For now, just keep in mind that the individual paths in each of our 3 examples have identical generated paint paths at each frame time in the output animation.

The first PASeq example preset (2nd gallery image above for 01 Bk Erase), initially erases the canvas to white for each output frame, then paints in the generated bezier paint paths. The 2nd PASeq example preset (3rd gallery image above for 02 Bk Don’t Erase), eliminates the first erase to white action step. So this is an extreme form of overdrawing. The new paint strokes for any given frame are overdrawn on top of the previous output frame image.

Since the PASeq doesn’t explicitly erase the canvas to white for the first frame of the animation, you would need to remember to do this manually. Remember, these are old example presets. A better approach today would be to add a mute keyframe to the initial SetCanvas action step at keyframe 2 for the first PASeq example. You can record a mute keyframe by holding down the m key and then option clicking a keyframe cell.

Note that while straight overdrawing leads to reduced visual flicker, the nature of this particular paint animation is such that the effect rapidly gets muddy (or visually too heavy). A better approach to overdrawing for this particular effects and source movie is shown in the 3rd PASeq example preset (4th gallery image above for 03 Bk Fade).

This third example starts by using the Geodesic Recursive Growth image operation effect to process the existing canvas image. This particular ip op effect acts like a visual feathering effect with it’s default startup parameter settings (what we used for this example).

The 2nd action step used the Fixed Color image operation effect to add in a 30% Mix of the solid color white. This is visually equivalent to a 30% fade to white.

So the first and second action steps of the 3rd example PASeq act to modify the existing canvas image over time. First by mildly feathering the existing previous output frame, and then fading it to white by 30%. After these 2 steps the identical generate and paint bezier paths of the source image edges are used. So again, the paint strokes for all 3 animation examples are the same. But the visual appearance of the 3 resulting animations is very different.

The first processed animation example shows that erasing the canvas for each frame introduces some visual flicker caused by discontinuities in the paint strokes from frame to frame over time.

The third processed animation example is the most visually interesting. Overdrawing is used to introduce temporal continuity from frame to frame in the animation. But the Fixed Color action step which fades to white insures that any given paint stoke only stays around in the processed animation output for a few frames before fading away, keeping the processed animation from getting muddy. The first Geodesic Recursive Growth action step which generates the feathering effect gives a dissipative effect to the individual paint strokes (like they seem to evaporate over time). So it’s an additional artistic feature of the animation.

For more information on working with movie processing in Studio Artist, and for access to the original Process Movie Tutorial pdf document, check out this user forum post.