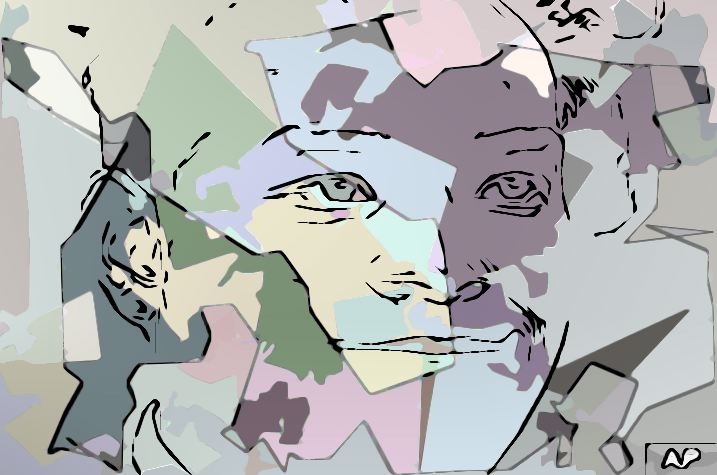 The paint action sequence (PASeq) below was used to generate the effect shown above. 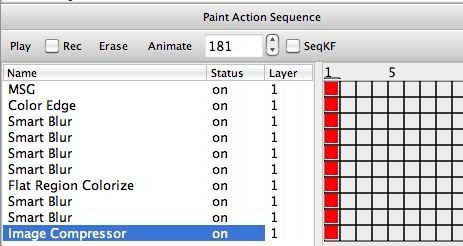 The image gallery below shows off the sequence of different effects used to create the overall effect. The first MSG action step generates avery abstract region representation of the source image shown in the first image in the gallery below. We’ll discuss how the MSG preset works a little later. 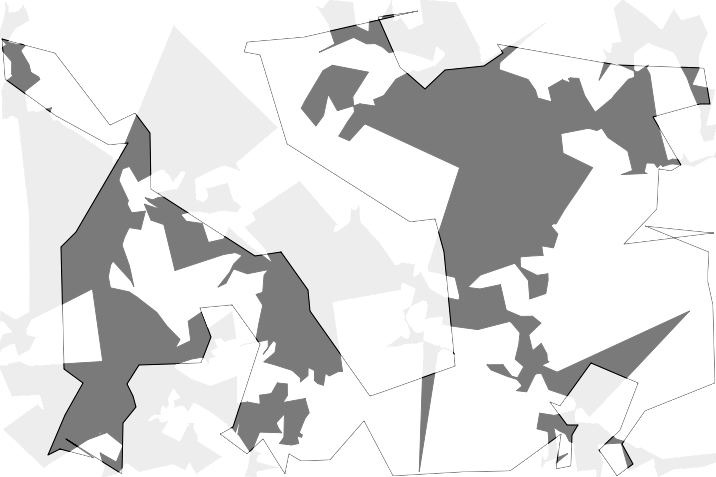 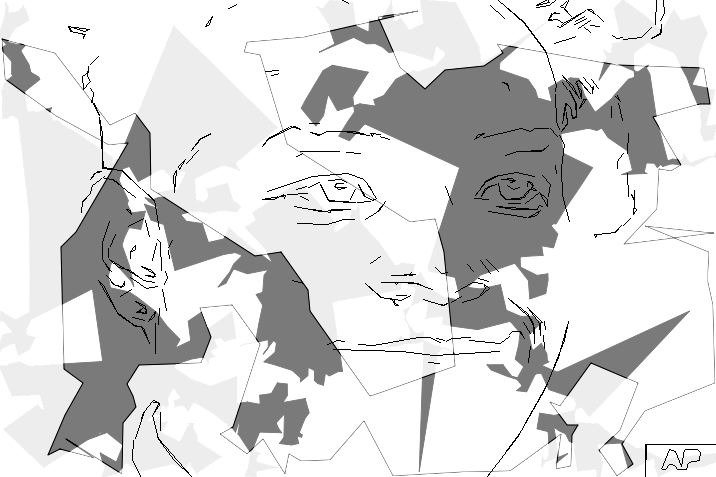 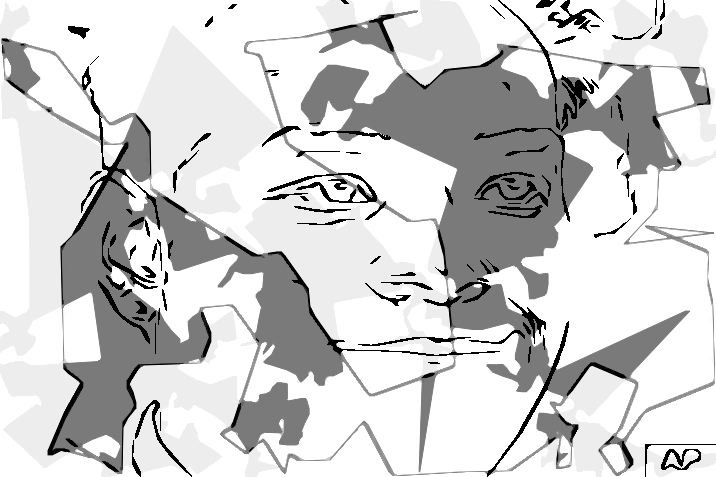 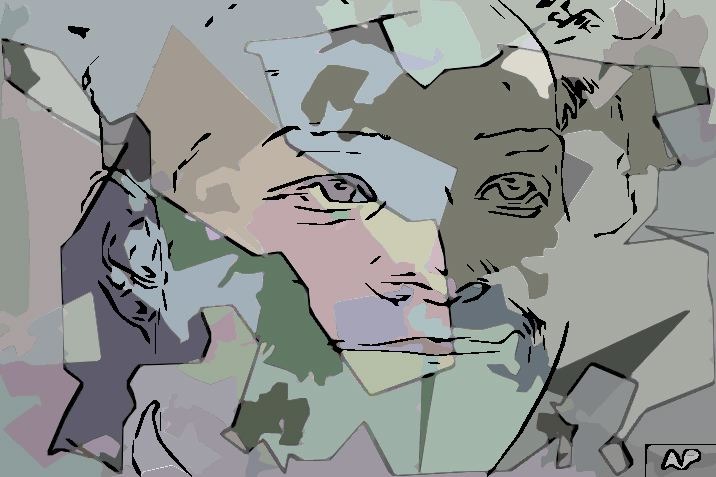 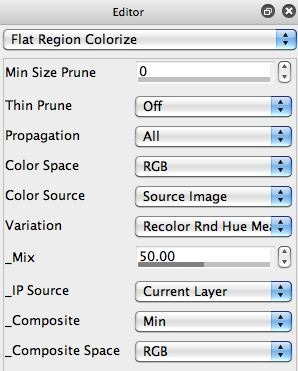 The second image in the gallery shows the output of the second Color Edge action step. The Color Edge image operation effect was used to generate a black sketch of the source image, and then that effect was Min composited into the existing canvas. The Render control for the Color Edge effect was set to the BW option, so that a black edge sketch was generated by the effect. And of course the IP Source for the effect was set to the Source Image option (because we want the edge sketch to be generated from the source image rather than from the existing canvas).

I then wanted to beef up the black lines in the canvas image, so I used the SmartBlur ip op with Min compositing in 4 sequential action steps to extend and broaden the black sketch lines (as shown in the 3rd image in the gallery).

The Flat Region Colorizer ip op was then used to colorize the flat color regions in areas in the canvas. Min compositing was used again, so that the dark sketch lines already in the canvas were not re-colorized by the effect. And the Variation control was set to the Recolor Rnd Hue Mean option so that the coloring of the flat color regions was done using hue randomized source colorings.

I then used the Smart Blur ip op again, this time with Replace compositing to smooth out the edge sketch. This was followed by the Image Compressor, to automatically boost the contrast of the final effect a little.

The image gallery below shows the IO (input-output) connections for the MSG preset used in the first action step in the PASeq. This MSG preset generates a randomized gray region patterning based on an abstraction of the source image. Two 1C Abstract6 processors are used to process the green color channel of the source image into 2 different rough abstraction images. The G Src (green) input channel is a rough approximation of the input luminance, whihc is why we used it as the input to the 1C Abstract6 processor.

The 1C Abstract6 processor generates a series of sample points based on it’s source image luminance or edge characteristics, and then tries to connect them all using a traveling salesman problem solving algorithm that tries to connect the sample points to generate a minimal distance path. The minimal distance connected path is then converted to a bezier region path and filled in in different ways depending on the processors adjustable parameters.

Here’s a link to some additional effect ideas using the 1C Abstract 6 processor that generates abstractions based on the traveling salesman problem solver. 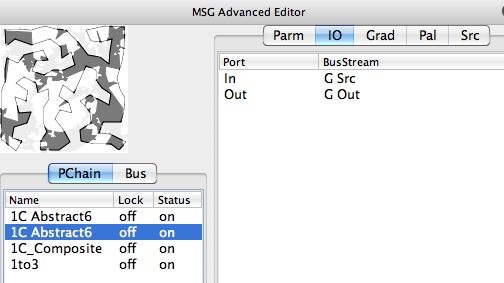 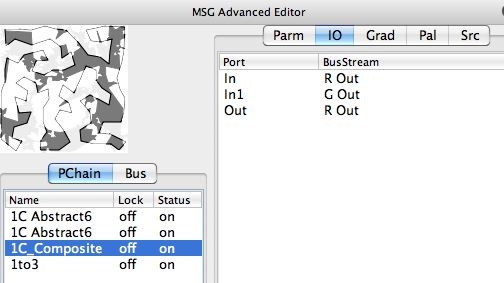 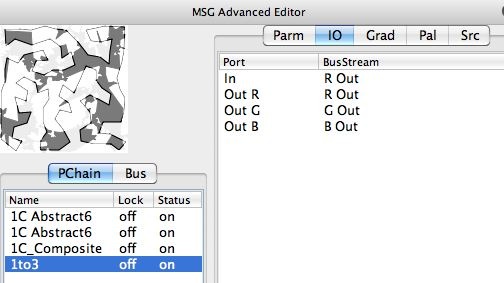