Raster vs Vector Text Drawing in the Paint Synthesizer 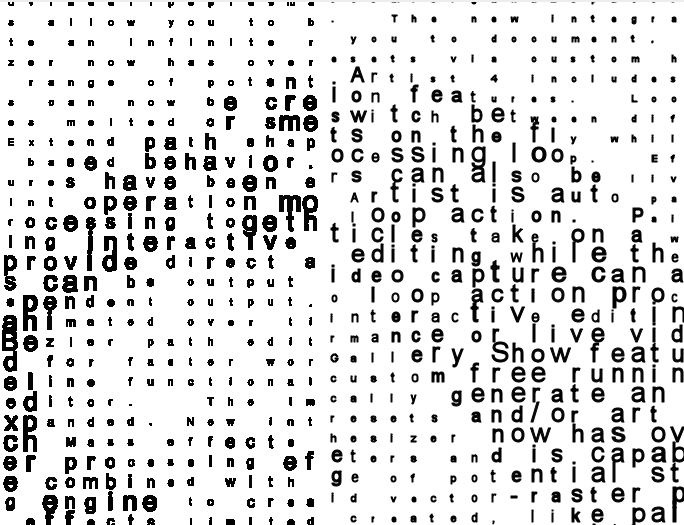 Note that the vector text brush drawing on the right is much smoother, drawn with anti-aliased edges, more readable. So let’s examine in detail how we manually edited yesterday’s paint synthesizer preset to get it to draw with vector paint nibs rather than raster paint nibs.

If you have not read yesterday’s post, please do so to familiarize yourself on how we constructed a paint preset that paints an image with a passage of text, where the size of the individual characters are modulated by the source image luminance. 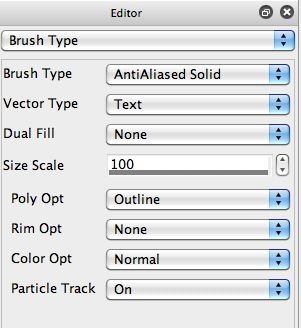 So when you choose the Source Brush as your brush type, you are defining a style of raster painting, where paint nibs are generated from a raster source brush representation composed of a small brush image (probably cached in memory somewhere).

This style of drawing was the very first kind of raster painting built into the original version 1 paint engine. Over time other ways of drawing have been added, which are available as other kinds of Brush Types. With Studio Artist 4, you can choose vector painting as well as raster painting, or hybrid styles that actually do both at the same time. Raster painting is great for creating organic textures and wet paint mixing effects, vector painting is great for creating crisp tight lines, mixing them together in a single preset allows you to get both effects simultaneously in a single preset.

As you can see in the 2nd gallery image, I changed the Brush Type parameter in the Brush Type control panel from Source Brush to AntiAliased Solid. I then set the Vector Type parameter to Text. This is all I had to do to change yesterday’s paint preset from drawing with raster text nibs to making it draw with anti-aliased vector text nibs. The text option for the Vector Type control uses the settings in the Text Brush Source control panel to define things like the maximum font size, font type, text position indexing, etc.

Many of the Vector Type options allow for integrated vector region paths to be drawn (so the entire paint path can be thought of as a vector region as opposed to a series of paint nibs laid down on a path). Some of them also allow for the more traditional series of paint nibs on a path rendering model used by most paint synthesizer presets (like the Sphere or Text or Blob options), the difference being that the paint nib is draw using a vector drawing engine as opposed to a raster blit engine.

As is often the case with Studio Artist, there may be more than one way to get to where you want to go. Such is the case for drawing with vector text.

Above we discussed how to use the AntiAliased Solid Brush Type to draw with vector paint nibs to render an image with textural characters. But there is a completely different approach you could have taken instead. 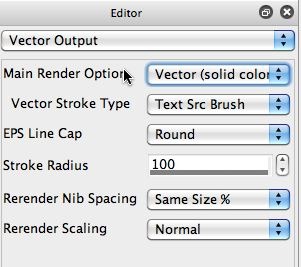 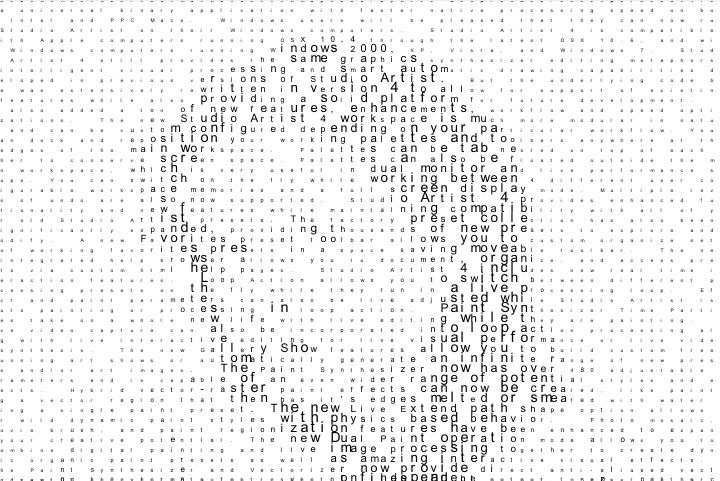 The 2nd gallery image above shows the Vector Output control panel. Note that we changed the Main Render Option parameter from it’s normal Raster setting to the Vector (solid color) setting. Note that I also set the Vector Stroke Type parameter to use the Text Src Brush setting.

The 3rd gallery image shows the results of the minimal editing changes we made to the original raster text drawing preset detialed in yesterday’s post. Note that once again we are now drawing with vector paint nibs, and that they are size modulated based on the source image luminance as detailed in yesterday’s post that described how we set that up in the Bush Modulation control panel.

Raster vs vector painting can get a little confusing when you dive into the way the Studio Artist Paint Synthesizer works. The original paint synthesizer design was based on the notion of raster painting a series of raster paint nibs that are placed on a vector path. So it was a hybrid rendering model, the paint paths were vector bezier curves, so they could always be edited after the fact, and were also resolution independent. The paint nibs were raster paint nibs, generated by applying digital paint to a brush source image that was then blitted onto the canvas at a specific loccation.

Both the new AntiAliased Solid Brush Type and the Vector options for the Main Render technique are 2 very different approaches to building paint presets that incorporate live vector painting. They both provide alternative approaches to building and rendering paint nibs that are somewhat different than the original raster paint techniques used in the original paint synthesizer design. We have discussed them both above in the context of building a simple paint preset that renders a source image with luminance modulated text characters. But these same vector drawing options can be used to create all kinds of interesting vector painting effects.

As we mentioned above, the paint synthesizer also provides several different dual-mode techniques that allow for simultaneous vector and raster painting to be combined into a single paint preset. This is different from the DualMode Paint operation mode, which allows for live image processing effects to be interleaved into live paint effects. We’ll discuss more on how to build dual-mode paint preset effects in the future.

Here’s a tip that discusses in more detail how to work with Vector Drawing in the Studio Artist paint Synthesizer.