I quickly threw together a woodcut simulation effect for the recent discussion taking place on the Studio Artist User Forum concerning Lynn Ward’s woodcut stylings. It’s one example of some of the different woodcut effect variations I tried out. This image was generated by a custom paint action sequence (PASeq), and is based on a simple paint synthesizer preset that uses the anti-alias solid brush type to paint with a vector paint stroke. The paint preset used is designed to paint white vector lines onto a black canvas. 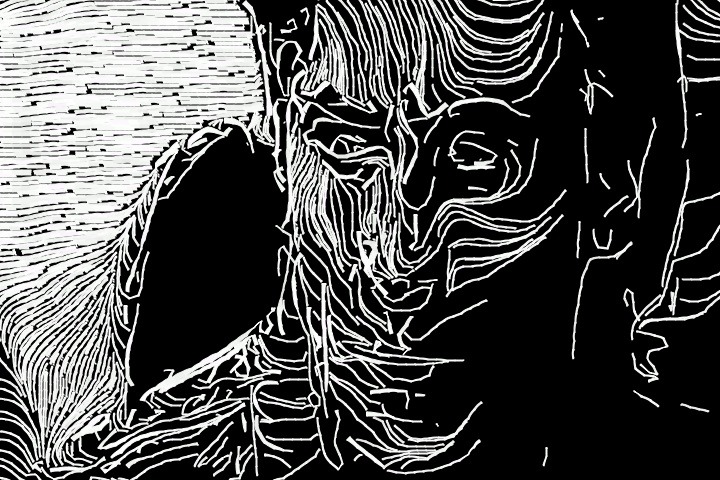 The screen snap below shows the PASeq used to create the image above. 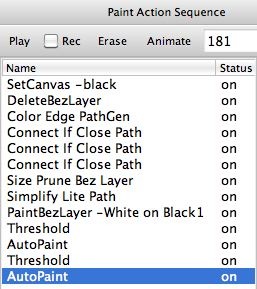 The PASeq starts off by erasing the canvas to black. It then erases the bezier path frame. It then uses the Color Edge Ip Op to generate a set of bezier paths representing the edges in the source image. I then used a series of Path menu commands to connect bezier paths if they are close to each other, size prune small paths (removes them if they are small), and simplify the bezier paths (which stylizes their shape). At this point I used the Path : Paint Paths : Full Layer menu command to paint in the stylized bezier edge paths with my white paint preset. I then used the Threshold Ip Op to generate a selection mask from the source image that emphasizes highlights in the source image.  I modified my paint preset so paths would only start in the highlight selection area. I then repeated this 2 step threshold – restricted paint in process using a second lighter highlight mask area.

The screen shots below show the progression of the PASeq as it runs. 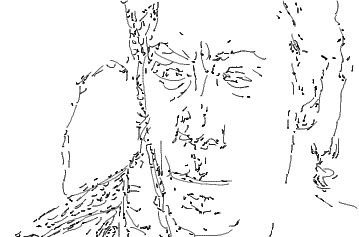 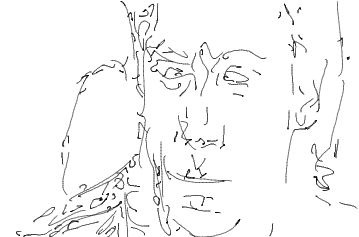 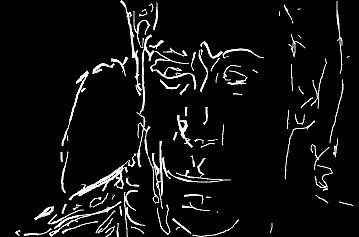 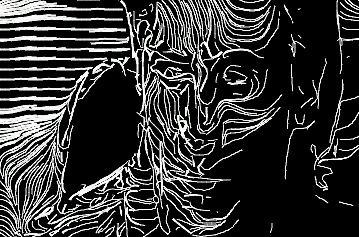 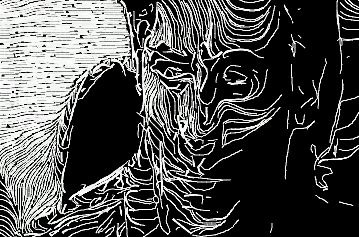 The images show the original edge map bezier path frame generated by the Color Edge Ip Op, the bezier paths after connecting, size pruning, and stylizing, the painted in bezier paths, and the results of the dual 2-step mask to highlight and then paint in processes.

Part of my thinking behind the steps used to build this PASeq was to try and emulate how Ward manually builds his woodcut imagery.  He places a great deal of emphasis on presenting a solid outline of the important objects in the scene he is drawing. And the images have a very noire look, where only the highlights are shaded in with hatching lines.

I used the Color Edge Ip Op to generate paths representing the source image as a way of trying to first outline the important shapes in the image. There are a lot of different ways I could have done this. There is a Path : Generate menu that will do it directly, and other Ip Ops can be used as well to do it.

I used the Threshold Ip Op to generate my highlight emphasis masks from the source image.  I set the Threshold Composite parameter to Replace Region Selection so that the output of the threshold effect was routed directly to the selection buffer as opposed to being drawn in the canvas. Rather than turn on masking when painting, I set the Path Start Inhibitor control to Select region Only, which means that paint paths will only start in areas of the image that are full on selected (selection mask == 255 for the pixel).

The look of restricting where paths start but then letting them freely draw is very different than if I had turned on the Mask checkbox in the main operation toolbar and directly masking paint strokes as they draw. I also used a Path End If Canvas parameter set to Not Black, which means that a paint stroke stops painting if it runs into an area of the canvas that isn’t black. I’m making the assumption that I start with a black canvas, and then i’m drawing white paint strokes.  i paint in the outlines first.  Then I paint in the highlights.  Any white paint stroke will stop drawing if it runs into an existing paint stroke. So the outlines are never overdrawn, and paint strokes never overdraw each other. This was done to try and emulate the way a woodcut artist would work to build a print.

Below is another variation on this kind of approach to building a woodcut effect.  I used the vectorizer to build the edge outline strokes for this particular image, and was trying to distinguish the outline drawing a little more than the highlight stroke hatching in the final woodcut effect. 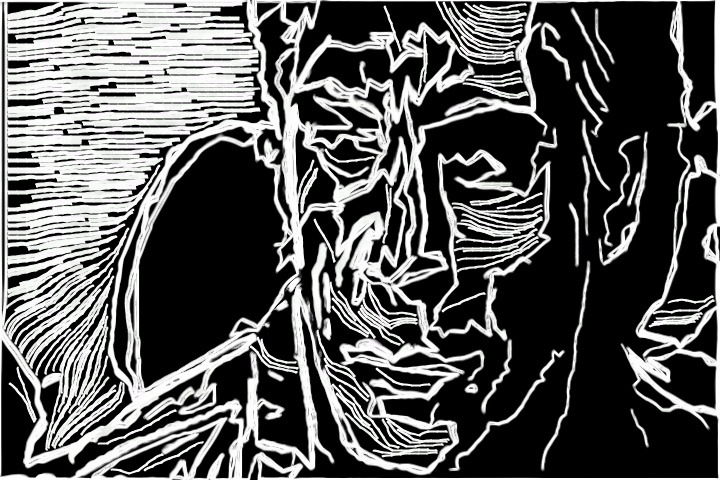 Ward’s work is stunning, so I think I have some more work to go through before I get closer to the full nuance his woodcuts create. But I hope this post gives you some ideas about how to approach building your own woodcut effect.