Over the last 2 days we first showed how to build a paint synthesizer preset that uses an additional embedded MSG preset to paint a chaotic attractor, and then to build a moving paint animation by attaching temporal generators to editable parameters in the embedded MSG preset. Today we’ll modify yesterday’s animation approach to incorporate recursive processing (overdrawing on a previous modified output canvas frame). Recursive processing allows for generating an artistic smeared paint trail effect to the dynamic movement of the painted chaotic attractor. 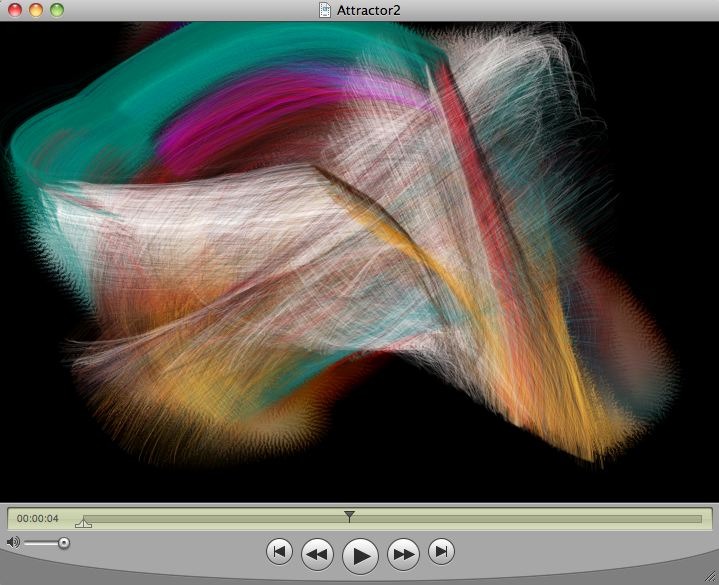 We previously discussed recursive painting and overdrawing as an approach to reducing flicker when building paint animation effect for auto-rotoscoping source movie files. The movement of the painted chaotic attractor in yesterday’s animation is actually very smooth and flicker free. But we can still use recursive processing to build an artistic smear into the overall paint animation. Rather than erasing to black for each new output frame, we modify the previous output frame, and then overdraw on top of the modified previous output frame image.

First, we added a mute keyframe at frame time 2 to the first Ease to Black action step. Mute keyframes show up as black keyframe cells, and are recorded by holding down the option and m keys before clicking the appropriate keyframe cell in the PASeq timeline. The mute keyframe means that the erase to black action step will only be played back for the very first frame of the animation. We only want to erase to black for the first frame, after that we want to overdraw on modified previous output frame images. 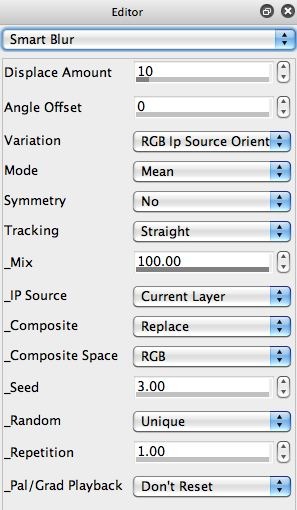 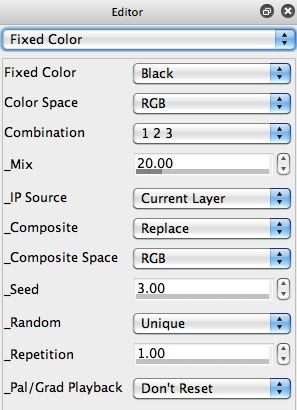 Then, we added our 3rd change by adding a Fixed Color image operation action step as the 3rd action step in the PASeq (3rd gallery image above). We configured the Fixed Color Ip Op effect to slightly fade the canvas to black. Adding the slight fade to black insures that the recursive smear build up of the painted chaotic attractor fades out after a few frames. If we didn’t add a step like this to our recursive processing, the smear would keep building up over time as the animation progressed.

The finished pant animation is available here. Note the dissipative smear effect introduced into this modified form of yesterday’s chaotic attractor paint animation (where each new frame was erased to black and then painted in with no recursive processing and associated overdraw).

The approach we took to adding a dissipative smear effect in today’s post is kind of subtle. But you could make the effect much more dramatic if you wished by reducing or eliminating the fade to black step, and by using more severe modification effects to process the previous output frame prior to overdrawing.