Time Axis Rotation (shown above) is a cool temporal image processing feature available in Studio Artist 4. The image shown above is a frame capture from a time axis rotation video, which was generated by processing a source video of some kung fu fighters in a gym throwing kicks at each other with a time axis rotation effect. In looking at the frame capture you can see that a pretty boring source video of people doing some movement has been transformed into some amazing abstract animation. You can think of this effect as a variation on slit scan video processing, which we’ve discussed for the last few posts.

It also provides an interesting conceptual hurdle many people have trouble first ‘groking’, but here goes. You can think of a digital video as being a 3 dimensional object, where the horizontal and vertical spatial frame axis are 2 of the 3 dimensions, and the frames as stacked in order move through the 3rd dimensional ‘z’ axis. So a digital video file is like a rectangular box floating in space.  What time axis rotation does is rotate the 3D box, so that what was a time axis is now one of the spatial axis in the box that represents the digital video file. Is your brain also starting to spin when you think about this? 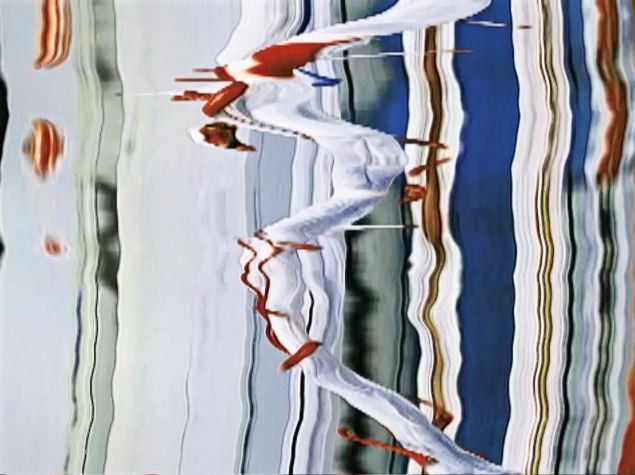 The temporal effect lets you choose a SlitScan direction, and an Interpolation type as adjustable parameters for the effect. Like all temporal image processing effects, it assumes you have a loaded source movie that gets processed to create the effect.

This particular temporal image operation effect can run fairly slow, especially as the total number of frames in your loaded source movie increases in size.  The reason why is that all of the individual frames in the entire source movie need to be accessed to build a single output frame of the time axis rotation effect. So you have to read in and process every frame in the video every time you generate a single effected output frame. 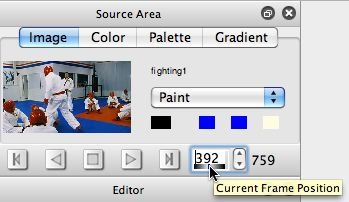 If you just want to generate static 2D image output from the loaded source movie, then by changing the current source frame you can generate different images that correspond to different time positions in the virtually rotated 3D digital movie object.

As always with any kind of slit scan effect, the interaction of the direction of movement in the original source movie along with the scan direction of the slit scan effect is going to work together to build the particular visual abstractions you see in the resulting effected output imagery or animations. Tracking movement in the video with the SlitScan direction, vs opposing movement is going to generate different results. And perpendicular opposition of movement leads to a whole other set of effects. We discussed this topic in detail 2 days ago in a previous post called Adjusting Slit Scan Effects – Scan Direction.

Here’s a link to another video processing example using the temporal time axis rotate complete effect, this time processing some video footage of an ice skater in motion.